The Cult of Thinness she argues that commercial campaigns beauty and dieting industry in 1980s and 1990s imposed unrealistic standards in beauty on contemporary women in first world countries. As countries become more cosmopolitan and Westernized, so the cult of thinness grows. In 2008, for example, a media furor was created when leading Indian actresses appeared to sport newly ultrathin bodies at a film premiere, thus abandoning the traditional preference for slightly rounded female stars of Bollywood, India’s film industry.

The Cult of Thinnes

Symptoms of the obsession with weight and beauty include the incidence of dieting, consumption of diet food and beverages, sales diet books, membership of weight-loss programs and consumption products the fitness industry (health clubs, exercise videos and exercise clothing and sportswear). Cosmetic surgery (e.g., liposuction, stomach banding, stomach stapling) has also become more widespread in the past decade.

While the desire for a svelte physique and toned body has traditionally been a preoccupation of women, men too have increasingly become caught up in it. There are many ironies in this state of affairs. 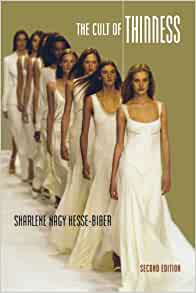 First, most of these weight-reduction techniques fail and yet consumers eagerly sign up for more. Second, while some television and media programs, news stories, and advertisements heavily promote weight-loss products and lifestyles, others aggressively promote fast-food outlets, recipes, and food dependent leisure activities.

Third, while role models such as fashion models, actors, musicians, and other celebrities are pressured to become and stay unnaturally thin, this occurs in a media discourse that celebrates their ideal shape, on the one hand, yet castigates as abnormal, unhealthy, and risky this obsession with thinness, on the other.

Fourth, the cult of thinness has spawned a myriad of eating disorders among young women and increasingly men) and some occupations such as models, air stewards, dancers, actors, performers, beauty pageant contestants, and gymnasts and other athletes as well as the wives of rich men) are even being called the anorexic professions.

So how did we get to this contradictory state of affairs?

In preindustrial societies, the ideal body shape was often rounded and well endowed because it was associated with health and fertility. However, a trend toward thinner bodies can be detected as modernity took hold of European culture. Partly, this concerned the changing conventions about ideal body shapes that accompanied the emergence modern fashion systems, but in addition, a succession of moral panics about starving, tight lacing, the condition called consumption and beauty regimes attests to the underlying concern about body shape and size.

While the Victorian era exalted the S-shaped female body (large bosom, small waist, and large bustle), this silhouette later fell out of favor. Gymnastics for girls and women promoted exercises and lady like sports that required a more a streamlined figure and muscular physique, and bicycling became a popular pastime for women, who reveled in the freedom it gave them.

In the 1920s, the garçonne (or boyish) shape for women took hold, at least among the fl appers and ultrafashionable avant-garde. This was also the period of the birth of beauty salons that specialized in special regimes using various mechanical contraptions, physical restraint, diets, supplements, chemicals, cosmetics and beauty products, exercises, and treatments such as saunas and mud baths to help women improve their body shape, tone and attractiveness.

The use of these regimes to achieve the desired ideal body shape was the precursor of the cult of thinness, which characterized twentieth-century notions of beauty.

It seems to have been a byproduct of two trends: a new focus on youth and youthfulness and the development of modern mass-media forms (which enabled the wide distribution of images of fashionable role models and new fads in beauty and exercise). Fashion photography epitomized this promotion of ideals of thinness, refl ected in fashion magazines and advertising.

The escalation of consumer culture and successful promotion of beauty-related products through advertising became an effective way to attract consumers, who were increasingly desperate to make their bodies conform to the ideal of the fashionable body. Hollywood celebrities, television stars, beauty queens, and fashion models were ever present to remind consumers of the pressure to emulate the ideal.

Although erogenous zones shifted over time, that merely nudged the contours of the beauty cult and ideal. One can detect, over the course of the twentieth century, a decrease in the body size of key role models (see Keenan 1977 ).

Fashions refl ected the emphasis on thinness, with designers creating new silhouettes that suited the young lithe mannequin but not the middle-aged matron. The fact that most couturiers were men and often homosexual reinforced a seemingly misogynistic attitude toward “normal” female bodies; however, female designers such as Madeleine Vionnet, Coco Chanel, Jeanne Lanvin, Madame Grès and Elsa Schiaparelli seemed to hold similar views.

The growth of a specific youth culture from the 1950s, and especially the popular music culture of the 1960s and 1970s, produced new role models. The new generation of fashion models, among them England’s Twiggy, promoted a childlike fi gure that has shaped fashion culture ever since and is reflected, for example, in the thinness of Kate Moss. Public debate about models who are too thin has recurred, especially when models have died from the effects anorexia.

Accusations that the media is responsible for increasing incidences of eating disorders by projecting unrealistically thin images of ideal bodies and beauty that pressure young women and men into dieting and risky weight reduction behavior have not been suffi ciently addressed. Eating disorder support groups and researchers argue that there is suffi cient evidence that the media plays a signifi cant role. The media denies that its infl uence can be proved.